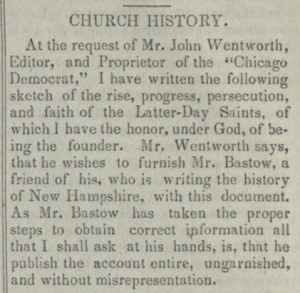 In 1842, Joseph Smith wrote a letter to John Wentworth, owner of the Chicago Democrat weekly newspaper, in response to a request from an author named George Barstow for a summary of the history and beliefs of the LDS Church. Neither the paper nor Barstow (whose name Joseph misspelled as Bastow in the excerpt below) who had asked Wentworth to solicit the account used the letter, so Joseph published it under the title “Church History” in the LDS newspaper Times and Seasons.1 The account is still popularly known as the Wentworth letter. This account of the First Vision is demonstrably dependent in large part on the 1840 account published by Orson Pratt. The Wentworth letter was republished in 1844 with some minor changes (noted below) in a book edited by I. Daniel Rupp.2

The following version of this account retains its exact wording, including spelling and punctuation. Clear allusions to or quotations from the Bible are identified in the notes. Paragraph breaks have also been added for the sake of readability and reference. Page numbers shown in brackets refer to the page that follows, unlike what one finds in the Joseph Smith Papers.

At the request of Mr. John Wentworth, Editor, and Proprietor of the “Chicago Democrat,” I have written the following sketch of the rise, progress, persecution, and faith of the Latter-Day Saints, of which I have the honor, under God, of being the founder. Mr. Wentworth says, that he wishes to furnish Mr. Bastow, a friend of his, who is writing the history of New Hampshire, with this document. As Mr. Bastow has taken the proper steps to obtain correct information all that I shall ask at his hands, is, that he publish the account entire, ungarnished, and without misrepresentation.

I3 was born in the town of Sharon Windsor co., Vermont, on the 23d of December, A. D. 1805. When ten years old my parents removed to Palmyra New York, where we resided about four years, and from thence we removed to the town of Manchester.4

My father was a farmer and taught me the art of husbandry. When about fourteen years of age I began to reflect upon the importance of being prepared for a future state, and upon enquiring the plan5 of salvation I found that there was a great clash in religious sentiment; if I went to one society they referred me to one plan,6 and another to another; each one pointing to his own particular creed as the summum bonum of perfection: considering that all could not be right, and that God could not be the author of so much confusion7 I determined to investigate the subject more fully, believing that if God had a church it would not be split up into factions, and that if he taught one society to worship one way, and administer in one set of ordinances, he would not teach another principles which were diametrically opposed. Believing the word of God I had confidence in the declaration of James; “If any man lack wisdom let him ask of God who giveth to all men liberally and upbraideth not and it shall be given him,”8 I retired to a secret place in a grove and began to call upon the Lord, while fervently engaged in supplication my mind was taken away from the objects with which I was surrounded, and I was enwrapped in a [p. 707] heavenly vision9 and saw two glorious personages who exactly resembled each other in features, and likeness, surrounded with a brilliant light which eclipsed the sun at noon-day.10 They told me that all11 religious denominations were believing in incorrect doctrines, and that none of them was acknowledged of God as his church and kingdom. And I was expressly commanded to “go not after them,”12 at the same time receiving a promise that the fulness of the gospel should at some future time be made known unto me.

On the evening of the 21st of September, A. D. 1823, while I was praying unto God, and endeavoring to exercise faith in the precious promises of scripture on a sudden a light like that of day, only of a far purer and more glorious appearance, and brightness burst into the room, indeed the first sight was as though the house was filled with consuming fire;13 the appearance produced a shock that affected the whole body; in a moment a personage stood before me surrounded with a glory yet greater than that with which I was already surrounded….

2 Joseph Smith, “Latter Day Saints,” in He Pasa Ekklesia: An Original History of the Religious Denominations at Present Existing in the United States, ed. I. Daniel Rupp (Philadelphia: James Y. Humphreys; Harrisburg, PA: Clyde and Williams, 1844), 404–410 (404–405). Differences in punctuation are not noted here. Images and a transcript are available at the Joseph Smith Papers website under the title, “‘Latter Day Saints,’ 1844.”

5 The 1844 chapter has “place” twice in this sentence instead of “plan,” undoubtedly a mistake.