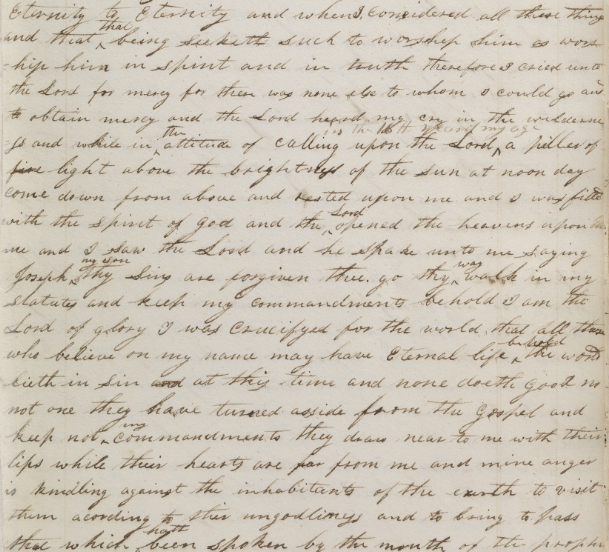 Sometime in the second half of 1832, Joseph Smith produced an initial draft of his History, including an account of a vision he said he had in his “sixteenth year,” prior to the appearance of an angel who informed him about the “plates of gold” containing the Book of Mormon. The account of the First Vision in this document was written in Joseph’s own handwriting. This History was not made public until 1965, when the LDS Church Historian’s Office leaked knowledge of its existence through a master’s thesis at BYU.1

Images of the manuscript and an unedited transcript may be viewed at the Joseph Smith Papers website.2 The following version of the account retains its exact wording but corrects and (except for deliberate use of archaic KJV-like language) modernizes the spelling, grammar, and punctuation. Insertions and deletions of no interpretive consequence are retained without notation. Allusions to or quotations from the Bible are indicated in the notes. The points where the next page of the handwritten manuscript begins are shown in brackets. Headings and paragraph breaks have also been added for the sake of readability and reference.

A history of the life of Joseph Smith Jr.: An account of his marvelous experience and of all the mighty acts which he doeth in the name of Jesus Christ, the Son of the living God, of whom he beareth record. And also an account of the rise of the church of Christ in the eve of time, according as the Lord brought forth and established by his hand:

I was born in the town of Sharon in the State of Vermont, North America on the 23d day of December, AD 1805, of goodly parents, who spared no pains to instructing me in the Christian religion. At the age of about ten years, my father Joseph Smith Sr. moved to Palmyra, Ontario County, in the State of New York, and being in indigent circumstances was obliged to labor hard for the support of a large family, having nine children. And as it required the exertions of all that were able to render any assistance for the support of the family, therefore we were deprived of the benefit of an education. Suffice it to say, I was merely instructed in reading, writing, and the ground rules of arithmetic, which constituted my whole literary acquirements.

At about the age of twelve years, my mind became seriously impressed [page 2] with regard to the all-important concerns for the welfare of my immortal soul, which led me to searching the Scriptures, believing, as I was taught, that they contained the word of God.

Thus applying myself to them, and my intimate acquaintance with those of different denominations, led me to marvel exceedingly; for I discovered that they did not adorn their profession by a holy walk and godly conversation12 agreeable to what I found contained in that sacred depository. This was a grief to my soul.

Thus, from the age of twelve years to fifteen, I pondered many things in my heart concerning the situation of the world of mankind—the contentions and divisions, the wickedness and abominations, and the darkness which pervaded the minds of mankind. My mind became exceedingly distressed, for I became convicted of my sins. And by searching the Scriptures, I found that mankind did not come unto the Lord, but that they had apostatized from the true and living faith, and there was no society or denomination that built upon the gospel of Jesus Christ as recorded in the New Testament. And I felt to mourn for my own sins and for the sins of the world.13

For I learned in the Scriptures that God was the same yesterday, today, and forever;14 that he was no respecter to persons, for he was God.15 For I looked upon the sun, the glorious luminary of the earth, and also the moon, rolling in their majesty through the heavens, and also the stars shining in their courses, and the earth also upon which I stood; and the beast of the field and the fowls of heaven and the fish of the waters, and also man, walking forth upon the face of the earth in majesty and in the strength of beauty, whose power and intelligence in governing the things which are so exceedingly great [page 3] and marvelous, even in the likeness of him who created them.16 And when I considered upon these things, my heart exclaimed, Well hath the wise man said, “The <It is a> fool <that> saith in his heart, there is no God.”17 My heart exclaimed, all these bear testimony and bespeak an omnipotent and omnipresent power, a Being who maketh laws and decreeeth and bindeth all things in their bounds,18 who filleth eternity,19 who was and is and will be20 from all eternity to eternity.

And when I considered all these things, and that that Being seeketh such to worship him as worship him in spirit and in truth,21 therefore I cried unto the Lord for mercy; for there was none else to whom I could go and obtain mercy. And the Lord heard my cry in the wilderness.22

And while in the attitude of calling upon the Lord23 in the 16th year of my age, a pillar of fire light24 above the brightness of the sun at noonday came down from above25 and rested upon me, and I was filled with the Spirit of God.26 And the <Lord> opened the heavens upon me and I saw the Lord.27 And he spake unto me, saying:

Joseph, <my son>, thy sins are forgiven thee.28 Go thy way,29 walk in my statutes, and keep my commandments.30 Behold, I am the Lord of glory. I was crucified31 for the world, that all those who believe on my name may have eternal life.32 Behold, the world lieth in sin at this time,33 and none doeth good, no not one.34 They have turned aside35 from the gospel and keep not my commandments. They draw near to me with their lips, while their hearts are far from me.36 And mine anger is kindling against the inhabitants of the earth,37 to visit them according to their ungodliness, and to bring to pass that which hath been spoken by the mouth of the prophets and apostles.38 Behold, and lo, I come quickly,39 as it is written of me, in the cloud, <clothed> in the glory of my Father.40

And my soul was filled with love; and for many days I could rejoice with great joy.41 And the Lord was with me. But I could find none that would believe the heavenly vision.42 Nevertheless, I pondered these things in my heart.43 {About that time, my mother and}44 But after many days,45 [page 4] I fell into transgressions and sinned in many things, which brought a wound upon my soul. And there were many things which transpired that cannot be written. And my father’s family have suffered many persecutions and afflictions.

And it came to pass when I was seventeen years of age, I called again upon the Lord, and he showed unto me a heavenly vision. For behold, an angel of the Lord came and stood before me; and it was by night. And he called me by name, and he said the Lord had forgiven me my sins. And he revealed unto me that in the town of Manchester, Ontario County, N.Y., there were plates of gold, upon which there were engravings, which was engraved by Moroni and his fathers, the servants of the living God, in ancient days, and deposited by the commandments of God and kept by the power thereof; and that I should go and get them. And he revealed unto me many things concerning the inhabitants of the earth, which since have been revealed in commandments and revelations. And it was on the 22nd day of September, AD 1822….

3 The words “receiving the testimony” are similar to what is found in John 3:32-33; Acts 22:18, though there may not be any allusion intended.

4 An allusion to Luke 24:49, “And behold, I send the promise of my Father upon you: but tarry ye in the city of Jerusalem, until ye be endued with power from on high,” which in turn alludes to Isa. 32:15, “until the spirit be poured upon us from on high.” The allusion becomes clearer below (see n. 7).

6 An allusion to Heb. 7:5, “the sons of Levi, who receive the office of the priesthood.” The expression “holy priesthood” comes from 1 Peter 2:5.

10 A clear allusion to 1 Cor. 2:4, “in demonstration of the Spirit and of power.” At this point in the handwritten manuscript, the handwriting of the scribe Frederick G. Williams ends, and handwriting identified by LDS scholars as that of Joseph Smith begins.

12 An allusion to 2 Peter 3:11, “what manner of persons ought ye to be in all holy conversation and godliness.”

17 Quoting Psalm 14:1, “The fool hath said in his heart, There is no God,” with some deliberate changes made.

18 A possible allusion to Acts 17:26, which says that God determined “the bounds of their habitation.”

21 A clear allusion to John 4:23b-24, “for the Father seeketh such to worship him. God is a Spirit: and they that worship him must worship him in spirit and in truth.”

22 Possible allusions to Psalm 40:1, “I waited patiently for the LORD; and he inclined unto me, and heard my cry,” and Isaiah 40:3, “The voice of him that crieth in the wilderness.”

23 The possible though by itself weak allusion here to Acts 22:16, “calling on the name of the Lord,” is strengthened by other allusions in this sentence and the next to other passages in Acts about Paul’s conversion (see below).

26 A possible allusion to Acts 9:17, in which Paul was told to “be filled with the Holy Ghost.”

27 A possible allusion to Matt. 3:16, “And Jesus, when he was baptized, went up straitway out of the water: and lo, the heavens were opened unto him, and he saw the Spirit of God descending like a dove, and lighting upon him.” Other possible allusions include Ezek. 1:1, “Now it came to pass…that the heavens were opened, and I saw visions of God”; Acts 9:27, “how he had seen the Lord in the way”; see also 1 Cor. 9:1, “Have I not seen Jesus our Lord?”

29 In light of the immediately preceding allusion to Mark 2:5, these words clearly allude to Mark 2:11, “…and go thy way into thine house.” The command “Go thy way” also appears in Acts 9:15, where Ananias is told to go see Saul of Tarsus (Paul).

32 A likely allusion to 1 John 5:13, “These things have I written unto you that believe on the name of the Son of God; that ye may know that ye have eternal life.”

35 A possible allusion to Exod. 32:8, “They have turned aside quickly out of the way which I commanded them.”

38 A likely allusion to Acts 3:21, “…the times of restitution of all things, which God hath spoken by the mouth of all his holy prophets since the world began.”

40 Likely allusions to Matt. 16:27, “For the Son of Man shall come in the glory of his Father with his angels,” and Matt. 24:30, “they shall see the Son of Man coming in the clouds of heaven with power and great glory.”

41 A likely allusion to Matt. 2:10, “they rejoiced with exceeding great joy.”

42 An allusion to Paul’s statement in Acts 26:19, “I was not disobedient unto the heavenly vision.”

43 A likely allusion to Luke 2:19, “But Mary kept all these things, and pondered them in her heart.”

44 Joseph penned these words and then crossed them out.

45 Joseph’s handwriting ends at this point, and the handwriting of the scribe Frederick G. Williams resumes.