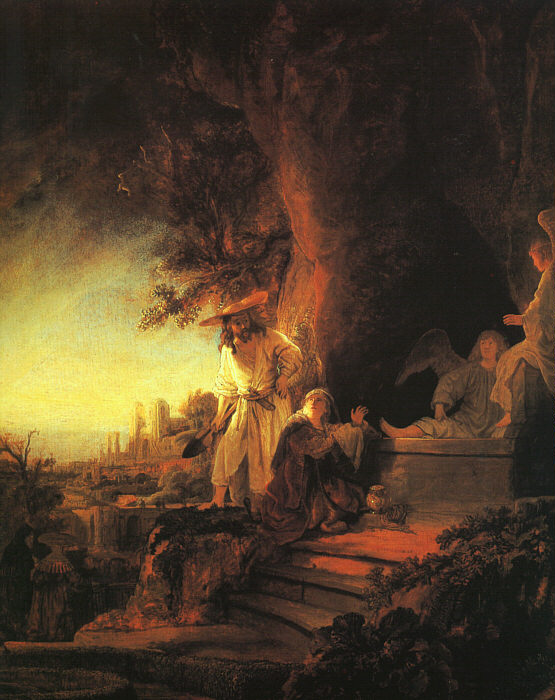 How do we know that Jesus rose from the dead? Several years back I put together a simple outline of the main lines of evidence using the word EASTER. Each point is tied to Paul’s important defense of the hope of the resurrection in 1 Corinthians 15. At the end is a list of six books for those wishing to pursue the evidence for each of the six points in detail.

One important evidence for Jesus’ resurrection is the fact that he was buried in a rock tomb and then a couple of days later that tomb was found empty. The Gospels accurately describe the tomb in which Jesus’ body had been laid, matching the many limestone rock tombs that had been carved around Jerusalem in the first century. The Gospels all report that women, including Mary Magdalene, were the first to discover the empty tomb—not something men were likely to make up. The author of the Gospel of John claims that he personally went to the tomb and saw that the body was gone and that the grave clothes had been left behind (John 20:2-9). Jewish critics of Christianity claimed that the disciples had stolen the body from the tomb. That claim is not credible (the disciples were disheartened and scared), but these critics implicitly conceded the empty tomb as fact.

An empty tomb by itself is just a mystery: the case of the missing body. But Jesus’ body wasn’t missing—it was living. It wasn’t removed; it was raised. We know this because Jesus appeared to numerous individuals after the tomb was discovered empty. He appeared to women, again including Mary Magdalene. He appeared to individuals, notably the apostle Peter, and to groups, especially the apostles. He also appeared to his brother James, who had not been one of his disciples before the crucifixion. In the Gospel of John, we again have the firsthand written account of one of the disciples who had seen the risen Jesus (John 21:24-25). Paul gives a list of those who had seen Jesus that overlaps with the appearances mentioned in the Gospels, yet it is clear that Paul and the Gospels are independent of one another (for example, Paul calls Peter “Cephas,” the Aramaic form of the name Peter, never found in the Gospels). Thus, we have very strong evidence that multiple people on multiple occasions did see Jesus alive after the tomb was found to be empty. The Resurrection is both the obvious and the only credible position that accounts for both the empty tomb and the appearances.

Saul of Tarsus was an educated Jew trained as a Pharisee around the same time that Jesus was teaching his disciples. Within a couple of years at most after Jesus’ death, Saul, also known as Paul, began actively persecuting Christians in the zealous belief that he was defending the truth of the Jewish faith. We have Paul’s firsthand testimony that Jesus appeared to him, turning him around 180 degrees from a persecutor of Christians to a Christian apostle (see especially Galatians 1; Philippians 3:3-12). Paul eventually met with the original apostles, and they affirmed his call to be an apostle (Galatians 2:1-10). It is extremely difficult to explain Paul’s conversion from persecutor to apostle as anything but the result of his sincere, certain belief that Jesus Christ had appeared to him.

Those who saw the risen Jesus changed remarkably for the better as a result. The disciples, whom the Gospels admit had been cowardly, became courageous, fearless witnesses for Christ. Paul went from being a zealous Pharisee protecting the exclusive claims of Judaism to a passionate Christian inviting Gentiles to become members of the people of God alongside Jewish Christians. The apostles and other early Christians frequently experienced harsh persecution—beatings, imprisonment, and so on—for nothing other than their proclamation that Jesus had been vindicated as the Jewish Messiah and Lord by his resurrection from the dead. We have firsthand testimony about such persecution from Paul in his epistles: he confesses that he himself had persecuted Christians before he became one, and he reports intense, repeated persecutions that he experienced as an apostle (see especially 2 Corinthians 11:23-33). The apostle James the son of Zebedee was martyred in AD 44 (Acts 12:1-2). James the Lord’s brother was martyred in Jerusalem in AD 62, as reported by the Jewish historian Josephus. The apostles Peter and Paul were both martyred in Rome about 64-66. There is good evidence to show that several of the other apostles, notably Andrew and Thomas, were also martyred for their work in proclaiming the risen Jesus. Of course, faith in Christ has continued to transform people’s lives for the better for the past two thousand years, inspiring sacrificial love, humanitarian aid, reconciliation of enemies, and more.

Skeptics commonly suggest that belief in Jesus’ resurrection arose later as a legend or myth. That suggestion could not be more wrong. Our earliest Christian writings, the early epistles of Paul, date from less than twenty years after Jesus’ death. They attest to the fact that belief in Jesus’ resurrection was the hallmark of the Christian movement from its very beginning. Scholars have identified at least verses 3-5 (possibly most or all of verses 3-7) in 1 Corinthians 15 as an early Christian confession or creed that Paul had “delivered” to the Corinthians when he first preached the gospel to them. Paul also says that he had “received” this creedal statement, meaning it originated from the other apostles. From Galatians 1:18-19, we know that Paul would have received this tradition within four years or so after Jesus’ death. That means that the confession dates from within just a few years of Jesus’ death and resurrection. The Resurrection is not a later legend.

The earliest followers of Jesus were all Jews. In their religious worldview, only the Lord, the God of Israel, was the proper recipient of spiritual worship, prayer, and devotion. Yet those earliest Christians worshiped and prayed to Jesus as Lord, even composing confessions (like the one in 1 Corinthians 15:3-5) and songs about him (Eph. 5:19). According to the New Testament, it was Jesus’ resurrection that convinced his disciples to revere Jesus in this way (Matt. 28:16-20; John 20:28; Acts 2:32-36).

Use the word EASTER to remind you of these six lines of evidence for the resurrection of the Lord Jesus:

Evans, Craig A. “Getting the Burial Traditions and Evidences Right.” In How God Became Jesus: The Real Origins of Belief in Jesus’ Divine Nature—a Response to Bart Ehrman, gen. ed. Michael F. Bird, 71–93. Grand Rapids: Zondervan, 2014. This chapter on the evidence for Jesus’ burial in a rock tomb is worth the price of the whole book.

Licona, Michael R. The Resurrection of Jesus: A New Historiographical Approach. Downers Grove, IL: InterVarsity Press, 2010. This academic defense of the Resurrection is especially strong in dealing with the evidence of Jesus’ appearances.

Fuller, Daniel P. Easter Faith and History. Grand Rapids: Eerdmans, 1965. Older but still penetrating analysis of the evidence from the conversion of Saul the Pharisee to Paul the apostle to the Gentiles.

McDowell, Sean. The Fate of the Apostles: Examining the Martyrdom Accounts of the Closest Followers of Jesus. New York: Routledge, 2015. A detailed, rigorous historical analysis of the evidence as to the martyrdom of the twelve apostles and Paul.

Craig, William Lane. Assessing the New Testament Evidence for the Historicity of the Resurrection of Jesus. Studies in the Bible and Early Christianity 16. Lewiston, NY: Edwin Mellen Press, 1989. Landmark academic study that begins with 115 pages on 1 Corinthians 15:3-8.

Bowman, Robert M. Jr., and J. Ed Komoszewski. Putting Jesus in His Place: The Case for the Deity of Christ. Grand Rapids: Kregel, 2007. See especially the first section, on the honors that the New Testament teaches are to be accorded to Jesus Christ.